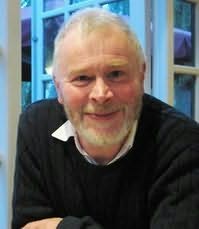 Andrew Puckett is a writer who feels he should experience for himself the trials imposed on his protagonists. Examples are:

Being locked in a freezer room at -40 degrees
Climbing a 1000 foot cliff from a rocky beach in the dark
Encountering the Exmoor Beast (involuntary)
Escaping from a prison ship (not actually incarcerated!)
Falling into the sea from Durdle Dor (not quite)
Escaping from a burning caravan

Before that, he grew up on his parents' farms, the first in a remote part of Dorset, the second in the shadow of Salisbury cathedral.

He worked in a brewery, a chemical factory and Porton Germ Warfare Establishment, where he acquired a painful immunity to Plague, Anthrax and Smallpox (which did at least give him the idea for his forthcoming novel, Going Viral). He then worked in various hospital labs in Taunton, London and finally Oxford, where he ran the microbiology department at Oxford Blood Transfusion Centre for fifteen years.

His first novel, Bloodstains, was derived from his experiences in the Blood Transfusion Service. He has subsequently published ten more, mostly on a medical theme. He now lives in Taunton with his wife and daughters.