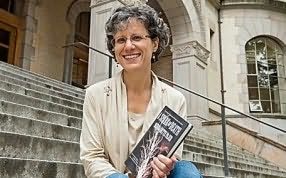 Bernadette loves the Pacific Northwest. She spent her childhood in Seattle, surrounded by beautiful mountains, listening to KJR (which played top 40 hits back then), and daydreaming (the first stage of writing). After high school, she studied pre-engineering at the University of Washington for two years before love—and a growing awareness that she was indifferent to Differential Equations—intervened. Newly wed, she and her husband moved to Orcas Island where the idea of being a writer took hold.She began to write. And write. And submit, and wait, and write. Fast forward a decade, past dozens of rejections and a growing pile of manuscripts, and she returned to the UW to take a Creative Writing Certificate course, where she met fellow writers who are very dear to her today. In 2001, she decided to complete her degree at the UW at the Bothell campus. Her focus was on Culture, Literature and the Arts. It was during spring break of her final quarter that her son, at last, was born.When she returned to writing fiction, she discovered that her heart and her passions were encapsulated in characters she’d created years earlier.