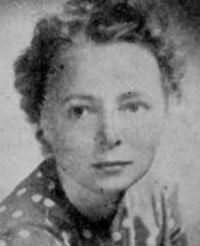 (1894 - 1976)
Hilda Lawrence was born in Baltimore, Maryland, in 1894. An avid reader of crime fiction, she wrote her first novel, Blood upon the Snow, in 1946. The novel introduced her three main series characters: Manhattan private investigator Mark East and sleuthing New England spinsters Miss Beulah and Miss Bessy. By combining these characters Hilda Lawrence's novels are a clever mixture of the hardboiled and softboiled styles of detective fiction. Hilda Lawrence wrote only four novels, all in the 1940s. Death of a Doll, which was published in 1947, is considered her masterpiece. She died in Manhattan, New York, in 1976.

Collections
Duet of Death (1949)
aka Duet in Death