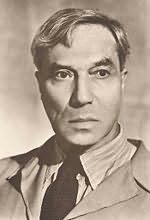 (Boris Leonidovich Pasternak)
Russia (1890 - 1960)
Boris Pasternak studied in Moscow and Germany before the turmoil of the First World War and the Russian Revolution forced him to work within the Soviet state. He first made his name as a poet but later as a translator and prose writer. His novel The Last Summer was published in 1934, to be followed in 1958 by Dr Zhivago. He was offered the Nobel Prize for literature in 1958 but declined it.
Novels
The Last Summer (1934)
Doctor Zhivago (1958)