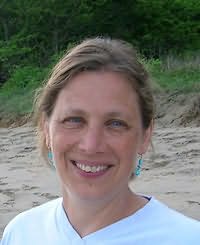 (b.1954)
Midori Snyder is the author of eight books for children and adults, published in English, French, and Dutch. She won the Mythopoeic Award for The Innamorati, a novel inspired by early Roman myth and the Italian "Commedia dell'Arte" tradition. Other novels include The Flight of Michael McBride (a mythic western), Soulstring (a lyrical fairy tale), The Oran Trilogy: New Moon, Sadar's Keep, and Beldan's Fire (imaginary-world fantasy, recently re-published in Vikings's Firebird line), and Hannah's Garden (a contemporary faery novel for young adults). Except the Queen, a novel written in collaboration with Jane Yolen is forthcoming in 2010.

Her short stories have appeared in numerous venues including the The Armless Maiden; Black Thorn, White Rose; Xanadu III; Swan Sister; Borderland; and The Year's Best Fantasy and Horror. Recent stories have appeared in Young Adult anthologies, The Greenman, Tales From the Mythic Forest and Troll's Eye View, A Book of Villianous Tales. Her nonfiction has appeared in Realms of Fantasy and other magazines, and in essay collections including Mirror, Mirror on the Wall: Women Writers Explore Their Favorite Fairy Tales.

In addition to writing, she co-directs The Endicott Studio for Mythic Arts with Terri Winding. She co-edited and designed the online Journal of Mythic Arts from 2003 - 2008; and she served as chairwoman on the judges' panel for the 2007 James Tiptree, Jr. Awards.

Midori currently lives in Arizona with her husband, Stephen Haessler.