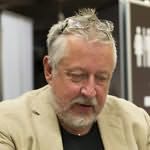 (Leif Gustav Willy Persson)
Sweden (b.1945)
Leif Gustav Willy Persson (born in Stockholm) is a Swedish criminologist and novelist. He is a professor in criminology at the Swedish National Police Board since 1992. He is known for his crime fiction novels and for his regular appearances as an expert commentator on notable crime cases in television and newspapers. Since 1999 he participates as an expert commentator on the television show Efterlyst on TV3.