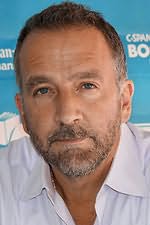 (b.1957)
George Pelecanos is an independent film producer, the recipient of numerous international writing awards, a producer and an Emmy-nominated writer of the HBO series The Wire, and the author of fifteen novels set in and around Washington, DC.

Sleepy Head (2001)
(Tom Thorne, book 1)
Mark Billingham
"Sleepyhead is one of the finest first-novels I've read in a long while. Mark Billingham has brought a rare and welcome blend of humanity, dimension, and excitement to the genre and earned an instant seat at the top table of crime novelists. An exceptional debut."

Rain Dogs (2005)
Sean Doolittle
"Sean Doolittle is a young writer with serious chops. With RAIN DOGS he brings it strong."

The Dark Streets (2006)
(Jack Liffey, book 9)
John Shannon
"Shannon has written an intelligent, surprising book, found the heart of his working-class characters, and delivered a first-rate thriller in the bargain."