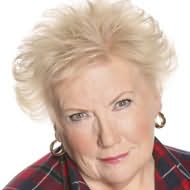 (1934 - 2016)
Denise Robertson was This Morning's resident agony aunt and had been with This Morning since the very first show in 1988. Denise was proud of the way the programme helped people with their problems and she often expressed her gratitude to viewers for their support through her own ups and downs over the years. During her time on the programme she received over 200,000 letters detailing the problems which afflict ordinary people, many of which she experienced herself. She was created a Member of the Order of the British Empire (MBE) on 17 June, 2006.