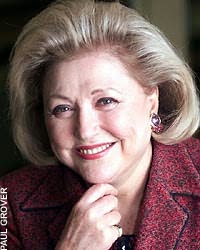 (b.1933)
Barbara Taylor Bradford was born in Leeds, Yorkshire, and by the age of twenty was an editor and columnist on Fleet Street. In 1979, her first novel, A Woman of Substance was published. That enduring bestseller was followed by many others. Her novels have sold more than sixty-one million copies worldwide. She lives in New York City with her husband, producer Robert Bradford.

Mourning Glory (2001)
Warren Adler
"The reader roots for protagonist Grace Sorentino, wanting her to win through and triumph in this new page-turner from the author of Random Hearts and The War of the Roses. Warren Adler's insight into people, and women in particular, plus his strong story-telling ability, make this a smashing and suspenseful read."

The Winter Rose (2006)
(Rose , book 2)
Jennifer Donnelly
"I loved this book. It is truly seductive, hard to put down, filled with mystery, secret passions, unique locations, and a most engaging heroine . . . She captivates from the first page to the last."