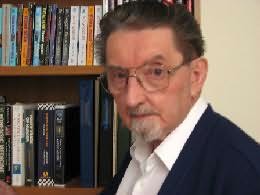 (Frank Allan Smith)
Canada (b.1927)
Frank Smith was born in Regina, Saskatchewan, and went to England at the age of six. He was educated there and went to work at the age of 16 in Bletchley Park, the wartime station where enemy communications were being decoded with the aid of the famous Enigma machine (although he had no knowledge of that until many years later). Returning to Canada in 1948, Frank worked for Alberta Government Telephones (now Telus) in Calgary and Edmonton until retiring in 1983.

He began writing in the 1960s. The theme of the first five books, beginning with Corpse in Handcuffs, was espionage in the Cold War years, but when that came to an end he moved on to police procedurals featuring DCI Neil Paget and DS John Tregalles.