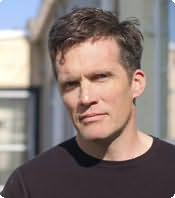 Louis Bayard is the author of The Pale Blue Eye (HarperCollins), a national bestseller nominated for both the Edgar and Dagger awards, and Mr. Timothy (HarperCollins), a New York Times Notable Book and one of People magazine's 10 best books of 2003. Louis' novels have been translated into eight languages, including Spanish, French, Portuguese and Russian.

Louis is also a staff writer and book reviewer for Salon.com, and his articles and reviews have appeared in the New York Times, the Washington Post, Ms., Nerve.com and Preservation. His other novels include Fool's Errand and Endangered Species (Alyson). He is also a contributor to the anthologies The Worst Noel and Maybe Baby (HarperCollins) and 101 Damnations (St. Martin's).

The Secret of the Nightingale Palace (2013)
Dana Sachs
"Sachs is an expansive and generous writer who gives us, at all times, the pulse of life being lived. She's the real deal."

The Deep (2020)
Alma Katsu
"Blending choice elements of mystery and horror into an impeccably recreated history, Alma Katsu has created a rich, haunting, irresistible novel that succeeds in rewriting the past while making it feel more ominously present than ever."

Scavenger (2020)
Christopher Chambers
"Scavenger is as hard and unflinching as noir gets?an immersive portrait of life on the streets in Trump’s America. Yet, in the person of Dickie Cornish, Chambers has delivered a voice of idiomatic, hard-won radiance?and a truth-seeker equal to all the lies and all that lies ahead."