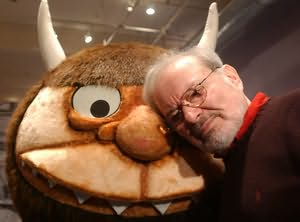 (1928 - 2012)
Beloved children's author and illustrator Maurice Sendak, largely credited with taking children's books from the light-hearted world of nursery rhymes into darker, scarier places, has died at the age of 83 in Danbury, Conn. Michael di Capua, Sendak's longtime editor, says the cause of death was complications due to a recent stroke.Sendak was born in Brooklyn, the son of lower class Jewish parents. His big break came in 1948 when he was hired to build window displays for New York toy story F.A.O. Schwarz. The store's children's book buyer introduced Sendak to Ursula Nordstrom, the editor of children's books at Harper & Row publishing and the rest, as they say, was history.Rest in peace, Maurice Sendak.
Collections
The Nutshell Library (1962)

Chapbooks
The Griffin and the Minor Canon (1968) (with Frank Stockton)