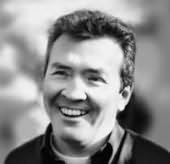 (b.1954)
Tony Bradman was born in south London, where he grew up and went to school. After leaving Cambridge University, he became a journalist and worked in the pop music press for several years.

Tony's first book was published in 1984 and, in 1987, he became a full-time author of both children's and adult's books. He has written fiction, poetry and edited a number of highly successful anthologies, and continues to write about and review children's books, mostly for The Daily Telegraph. As a life-long Beatles and John Lennon fan, he has also written a profile of the singer for children.

Woodsword Chronicles
The Trouble With Trolls (2018)