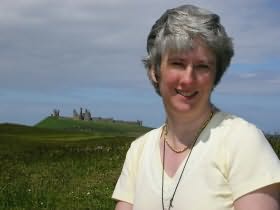 Lindsay Townsend is an English novelist who is currently writing historical romances for the American publishing company, Kensington Books. Her latest novel, A Knight's Vow, is her first historical romance and is now available, both in the U.S.A. and in the U.K. The book is set in twelfth-century England, against the romantic, but dangerous, backdrop of the Crusades. Lindsay has a first class honours degree in history from Bangor University, part of the University of Wales, where she specialised in the Middle Ages.

She is currently working on another historical romance for Kensington, A Knight's Captive, which is also set in England around the time of the Battle of Hastings.

Lindsay lives in Yorkshire, in the north of England, with her husband, Alan, and also has family in Devon. She loves singing, music, walking, reading and cooking - especially trying out old recipes.

She has been writing stories since the age of six, and has been a professional novelist for many years. Her previous books are romantic thrillers.

Medieval Creatures
5. The Virgin, the Knight, and the Dragon (2017)

Viking and the Pictish Princess
The Rose and the Sword (2020)