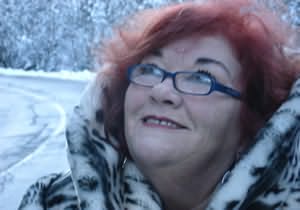 (b.1946)
Kaye Umansky is an English children's author & poet. She is best known for her Pongwiffy Series.

Born an only child to a poor family, Kaye stayed in and listened to the wireless whilst weaving furniture with her family. Her mother was a music teacher and encouraged her to play from a young age and her Dad was also a teacher who encouraged her reading.

After Kaye left school, she went to London to train as a teacher. Kaye enjoyed teaching music, drama and creative writing. She also did some acting and music in her spare time.

Kaye loved acting until one night when ahe developed stage fright and forgot her lines. She gave up acting shortly after this. During this time she carried on writing stories as a hobby.

Alongside her husband (Mo), Kaye formed a soul band and played in the evenings and at weekends, She says "never became rich and famous, but we had a lot of fun".

Kaye got her first children's book published in 1986. The book was a collection of songs for children and was called Phantasmagoria. Kaye still writes music books, along with plays, poems, novels and picture books.