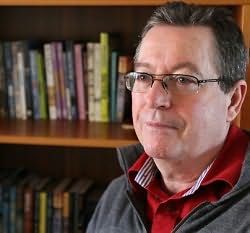 Canada (b.1957)
Eric Walters was born and raised in Toronto and resides in Mississauga, Ontario, with his wife Anita and his dogs Lola and Winnie the Poodle, while his three grown children, Christina, Nick, and Julia, reside in the area.

Walters often experiences the subjects he plans to write about. In April 2010 he walked 200 kilometres (120 mi) across the Sahara Desert before writing Just Deserts and in the summer, along with his son, he climbed Mount Kilimanjaro for Between Heaven and Earth.

In addition Walters founded and runs the Creation of Hope, an organization providing care for orphans in the Mbooni district of Kenya. Presently over 400 orphans are being provided with a services which include food, school fees, uniforms, tools, beds, livestock and the construction of two childrens residences in the town of Kikima.