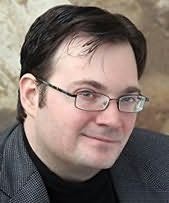 (b.1975)
Brandon Sanderson is an American fantasy author, who grew up in Lincoln, Nebraska. He lives in Utah with his wife and children and teaches creative writing at Brigham Young University.   He earned his Master's degree in Creative Writing in 2005 from Brigham Young University, where he was on the staff of Leading Edge, a semi-professional speculative fiction magazine published by the university. He was a college roommate of Jeopardy! champion Ken Jennings. He has been nominated twice for the John W. Campbell Award.

In 2013, he won a Hugo Award for Best Novella for The Emperor's Soul, set in the world of his acclaimed first novel, Elantris. Additionally, he was chosen to complete Robert Jordan's Wheel of Time(R) sequence.

Short Stories
The Hope of Elantris (2007)

Goldenhand (2016)
(Old Kingdom / Abhorsen, book 5)
Garth Nix
"Garth Nix is one of the best worldbuilders in fantasy, and this book is merely further proof. I love the Old Kingdom series, and Goldenhand is an excellent continuation, packed with the excitement and passion of a storytelling virtuoso at the height of his abilities."

Recluce Tales (2017)
(Saga of Recluce)
L E Modesitt Jr
"Essential reading for any fan of the increasingly impressive world that is Recluce."

An Alchemy of Masques and Mirrors (2017)
(Risen Kingdoms, book 1)
Curtis Craddock
"A gripping tale of a woman who refuses to be defined by her physical and magical limitations, thwarting both assassins and all who see her as a pawn. A great read!"

Strife's Bane (2018)
(Shattered Kingdoms, book 3)
Evie Manieri
"I loved these characters, even though I knew it was going to hurt. Heart-wrenching. Poignant. Lovely."

The Kingdom of Liars (2020)
(Legacy of the Mercenary King, book 1)
Nick Martell
"An excellent fantasy debut, with engaging worldbuilding and a good mix between action and character. I thoroughly enjoyed the novel, and look forward to following Nick's sure-to-be lengthy writing career."

Bystander 27 (2020)
Rik Hoskin
"Rik Hoskin’s Bystander 27 is a novel equal parts mystery and action that will appeal to fans of comic books and graphic novels."