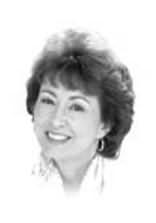 aka Gail Crease, Gail Derham
Gail suspected early in life that one of her Gemini personalities was a writer. Blessed with a vivid imagination, she was forever scribbling away at something, whether it was a gothic romance or a science fiction set in some strange, far off land. It wasn't until she read her first Regency-set novel, however, that she realized she'd found what she was looking for, and in October 1991, four months after submitting it, Gail sold her first Regency romance.

Born in Pembrokeshire, Gail emigrated to Canada with her parents and settled in the rolling countryside north of Toronto, Ontario. As an only child, she grew up in a home filled with books and music, as well as a colorful succession of dogs, cats, and budgies. Annual trips back to Wales served to keep her in touch with the grandparents and family she'd left behind, but they also exposed her to the wonderful castles and stately homes that dotted the region, an appreciation for which would show up later in her writings about the Regency period.

Gail pursued a variety of careers, but never gave up her dream of becoming a full-time writer. When she sold her fifth book, she decided to take the plunge and move a step closer to making that dream a reality. She relocated to Vancouver Island and began writing on a full-time basis. Eight books later, she's still writing and loving every minute of it. She shares that passion with the wonderful man in her life, and with a close circle of family and friend - many of whom are fellow writers.