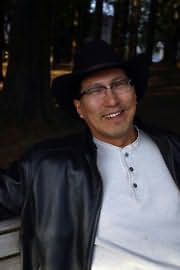 Canada (1955 - 2017)
In 1991 Richard Wagamese became the first Native Canadian to win a National Newspaper Award for Column Writing while he was with the Calgary Herald.

With an old 256 computer, he stayed in a friend's basement and wrote what would become his first novel, Keeper'n Me. It was published in 1994 and to date has sold over 24,000 copies. He was honored with the Alberta Writers Guild Best Novel Award for that story.