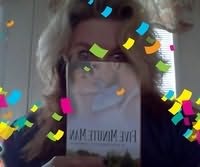 aka Avelyn McCrae
Abbie Zanders is a wife and mother of three (including a set of identical twins), born and raised in the mountains and valleys of Northeastern Pennsylvania. She has a degree in Computer Science with a minor in Mathematics. Though she has spent the last 25 years developing financial software for healthcare-based companies, she has also held second jobs as a pub waitress, a restaurant dessert baker, a secretary, and a bread shelf stock girl.

A voracious reader, she carries both a Nook and a Kindle with her at all times, as well as several mini-sized notebooks to jot down ideas when inspiration strikes. Writing is a life-long pursuit; it began somewhere in elementary school when she used to secretly draft scripts for then-popular TV shows, writing herself in as a main character, of course. Things have changed a lot since then - she now focuses on love stories for mature audiences - but her passion for writing remains the same.

She is both grateful and honored to be able to share her stories with those having a similar penchant for love stories, and promises her readers two things: no cliffhangers, and always happily ever afters.