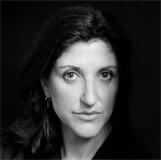 Laura Zigman grew up in Newton, Massachusetts, and graduated from the University of Massachusetts at Amherst and the Radcliffe Publishing Procedures Course.

She spent ten years working in New York in book publishing where she was a publicist for Times Books, Vintage Books, Turtle Bay Books, Atlantic Monthly Press, and Alfred A. Knopf.

After moving to Washington, D.C. and working briefly as a project manager for The Smithsonian Associates and a consultant for Share Our Strength, an anti-poverty non-profit group, she finished her first novel. Animal Husbandry was published in 1998 by The Dial Press and became a national bestseller. It was published in fourteen countries and in 2001 the film based on the book, Someone Like You, starring Ashley Judd and Hugh Jackman, was released by Fox 2000. Her second novel, Dating Big Bird, also published by The Dial Press, came out in 2000, and her third novel, Her, published by Knopf followed in 2002. Her latest novel, Piece of Work, to be published by Warner Books on September 25, 2006 , is based on her experiences as a publicist and has been optioned by Tom Hanks' production company, Playtone Pictures, with My Big Fat Greek Wedding's Nia Vardalos set to write the screenplay and star in the movie .

She currently lives outside Boston with her husband and young son.