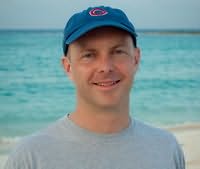 Geoff Rodkey is the author of the Chronicles of Egg middle grade comedic adventure series and the Emmy-nominated screenwriter of such hit films as Daddy Day Care, RV, and the Disney Channel's Good Luck Charlie, It's Christmas.

Geoff grew up in Freeport, Illinois and began his writing career on his high school newspaper. While in college, Geoff was an editor of both the Harvard Lampoon and the Let's Go travel guide series. His early writing credits include the educational video game Where In the World Is Carmen Sandiego?, the non-educational MTV series Beavis and Butt-head, and Comedy Central's Politically Incorrect.


Geoff currently lives in New York City with his wife and three sons. They do not have any pets, mostly because the whole experience with the goldfish was just too upsetting

Arlo Finch in the Lake of the Moon (2019)
(Arlo Finch, book 2)
John August
"A masterful mix of mystery and adventure, set in a supernatural scouting troop. Reading this book made me wish I hadn't dropped out of Cub Scouts."