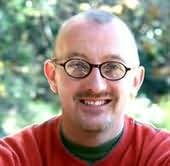 Nick Alexander is an English writer, his first novel was published in 2004, 50 Reasons to Say Goodbye.
Alexander was born in 1964 and grew up in the seaside town of Margate England.
He has traveled widely and lived in Wolverhampton (UK), Cambridge (UK) and New York (US).
He has been living in France since 1990.

His novel, The Half-Life of Hannah, published in September 2012 reached #1 in the free UK Kindle book chart and sold over 230,000 copies. His 2011 novel, "The Case Of The Missing Boyfriend" also spent six weeks in Amazon Uk's top ten kindle chart netting over 70,000 downloads and reaching #2, and returned to chart again in March 2012 (Highest position #11) The sequel to "The Case Of The Missing Boyfriend" entitled, "The French House" was Amazon UK's most preordered title in March 2013 and reached #2 in the UK Kindle chart in April 2013.
Genres: Romance, Historical