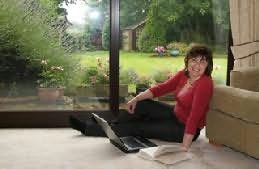 Phillipa Ashley loves writing lively, sexy, funny romantic fiction. After studying English Language and Literature at Oxford University, she worked as a copywriter and journalist. Her first novel, Decent Exposure – titled DATING MR DECEMBER for the US – won the Romantic Novelists Association New Writers Award. In 2009, it was filmed as a Lifetime TV movie called 12 Men of Christmas starring Kristin Chenoweth and Josh Hopkins. She lives in an English village with her husband and daughter.

The Lost Sister (2018)
Tracy Buchanan
"I was hooked from the first dramatic opening scene. It’s a gripping story of love and loss."

The Hopes and Dreams of Lucy Baker (2019)
Jenni Keer
"Laughter and tears combine in this heartwarming story of female friendship and love across all generations."

That Night In Paris (2020)
(Holiday Romance , book 2)
Sandy Barker
"Made me want to pack my bags immediately!."

Meet Me at Pebble Beach (2020)
Bella Osborne
"This wonderful story will leave you with the warmest of glows and remind you of why we should all make the most of every minute."