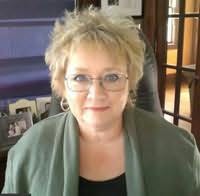 aka Chery Griffin
Victoria Alexander is a New York Times bestselling author was an award winning television reporter until she discovered fiction was much more fun than real life. She turned to writing full time and is still shocked it worked out.
Since the publication of her first book in 1995, she has written thirty-one full length novels and six novellas. The Perfect Wife—originally published in 1996 and reissued in March 2008—hit #1 on the New York Times list. Sixteen of her books are bestsellers hitting the New York Times, USA Today and/or Publishers Weekly bestseller lists. With books translated into more than a dozen different languages she has readers around the world and has twice been nominated for Romance's Writers of America prestigious RITA award.
Victoria grew up traveling the world as an Air Force brat. Today, she lives in Omaha, Nebraska with her husband and her dogs. Victoria had two bearded collies, Sam and Louie

Omnibus
The Night Before Christmas (1996) (with Sandra Hill, Dara Joy and Nelle McFather)
Santa Paws (1997) (with Nina Coombs (Nina Pykare), Annie Kimberlin and Miriam Raftery)
The Cat's Meow (1998) (with Nina Coombs (Nina Pykare), Coral Smith Saxe and Colleen Shannon)
Secrets of a Perfect Night (2000) (with Rachel Gibson and Stephanie Laurens)
The One That Got Away (2004) (with Liz Carlyle, Eloisa James and Cathy Maxwell)
A Magical Christmas Present (2008) (with Lisa Cach and Eugenia Riley)