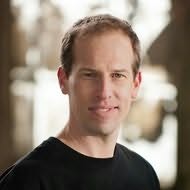 (b.1974)
Chris Bradford is a true believer in practising what you preach. For his award-winning Young Samuraiseries, he trained in iaido (samurai swordmanship), karate, ninjutsu and earned his black belt in Zen Kyu Shin Taijutsu. Previously he has trained in judo, muay thai and kickboxing.

For his new BODYGUARD series, Chris embarked on an intensive close protection course to become a qualified professional bodyguard. During his training, he acquired skills in unarmed combat, defensive driving, tactical firearms, threat assessments, surveillance, and even anti-ambush exercises.

Before becoming a full-time author, he was a professional musician (who once performed for HM Queen Elizabeth II), a songwriter and music teacher. He has written five non-fiction books on music, including the critically acclaimed Heart & Soul (Sanctuary, 2005).

He lives on the South Downs, England with his wife, two sons and two cats called Tigger and Rhubarb (the cats' names!)