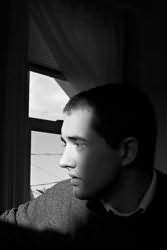 (b.1982)
James Boice is a fiction writer residing near Boston, Massachusetts. He was raised in Northern Virginia and dropped out of college at eighteen to pursue fiction. He is the author of MVP, published by Scribner in 2007, the prologue of which debuted in Esquire in September 2006. His work has also appeared in Fiction Magazine, McSweeney's and Like Water Burning. He is a contributing writer for Esquire.