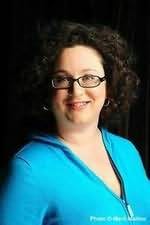 (b.1971)
Sophie Hannah is an internationally bestselling crime fiction writer. Her crime novels have been translated into 34 languages and published in 51 countries. Her psychological thriller The Carrier won the Specsavers National Book Award for Crime Thriller of the Year in 2013. In 2014 and 2016, Sophie published The Monogram Murders and Closed Casket, the first new Hercule Poirot mysteries since Agatha Christie's death, both of which were national and international bestsellers. Sophie's novels The Point of Rescue and The Other Half Lives have been adapted for television as Case Sensitive, starring Olivia Williams and Darren Boyd. Sophie is also a bestselling poet who has been shortlisted for the TS Eliot award. Her poetry is studied at GCSE and A-level throughout the UK. Sophie is an Honorary Fellow of Lucy Cavendish College, Cambridge. She lives in Cambridge with her husband, two children and dog.

I Don't Know How She Does It (2002)
(Kate Reddy, book 1)
Allison Pearson
"Funny, heart-breaking, wise and delightful."

Before I Go To Sleep (2011)
S J Watson
"So high-concept, so ambitious and so structurally brilliant. It's so rare to read a thriller that's perfect in every detail, but this one definitely qualifies!"

Under a Silent Moon (2013)
(DCI Louisa Smith, book 1)
Elizabeth Haynes
"Haynes is the most exciting thing to happen to crime fiction in a long time."

The Silversmith's Wife (2014)
Sophia Tobin
"A dense, intricate historical thriller in the tradition of Hilary Mantel."

The Intruder (2014)
P S Hogan
"I loved it - gripping, sinister, original and brilliant."

The Kind Worth Killing (2015)
Peter Swanson
"Gripping, elegantly and stylishly written, and extremely hard to put down!"

Things We Have in Common (2015)
Tasha Kavanagh
"A striking and highly enjoyable debut."

The Honeymoon (2017)
Tina Seskis
"One of the world's leading experts at pulling the wool over readers' eyes until the very end."

I Did It for Us (2018)
Alison Bruce
"Alison Bruce is fascinating. Her imagination is always unpredictable and her writing is challenging and compelling."

The 7 1/2 Deaths of Evelyn Hardcastle (2018)
Stuart Turton
"This book blew my mind. It is utterly original and unique. I couldn't get it out of my head for days afterwards."

Bring Me Back (2018)
B A Paris
"An addictive new voice in suspense fiction."

Snap (2018)
Belinda Bauer
"'Belinda Bauer is a marvel. Her novels are almost indecently gripping and enjoyable."

Read Me (2018)
Leo Benedictus
"A fascinating, disturbing, and original thriller that erases the boundaries of the genre and draws challenging new ones."

The Hunting Party (2018)
Lucy Foley
"Very gripping and so good on the awfulness of some long-history friendships."

The Flower Girls (2019)
Alice Clark-Platts
"Tense, intriguing and memorable. I couldn't put it down."

Final Offer (2019)
(Ingrid Skyberg, book 6)
Eva Hudson
"I was immediately struck by the plotting savvy and grip-factor of Eva Hudson's writing-she is a natural storyteller."

The Holdout (2020)
Graham Moore
"The most gripping and satisfying thriller I've read in more than a decade."

The Appeal (2021)
Janice Hallett
"Very gripping. I loved the ambitious and unusual approach."

The Dinner Guest (2021)
B P Walter
"Stayed up till past 2am to finish this! Well done, B P Walter – immensely gripping!"