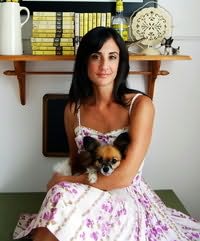 Marie-Helene Bertino's debut novel 2 AM AT THE CAT'S PAJAMAS will be published by Crown in August, 2014. Her collection of short stories SAFE AS HOUSES received The 2012 Iowa Short Fiction Award and the Pushcart Prize and was long-listed for the Frank O'Connor Short Story Award and The Story Prize. She hails from Philadelphia and lives in Brooklyn. She was an Emerging Writer Fellow at NYC's Center for Fiction and teaches at NYU, Sackett Street Writers' Workshop, The Center for Fiction, and One Story's Emerging Writer's Workshop, where she was the Associate Editor for 6 years. She has received fellowships from The MacDowell Colony and Hedgebrook and currently works as a biographer of people with Traumatic Brain Injury (TBI).

This Town Sleeps (2020)
Dennis E Staples
"Marked in its depths by an unflinching insight into what fills and depletes human hearts, This Town Sleeps leads you into desperate expanses then, surprise, turns skyward in shatteringly insightful moments that leave you breathless. Its tender creatures, lupine, yearning and failing, inhabited my mind for days. A heartbreaker that laughs through its pain, a gem. Dennis E. Staples is an important new voice. How lucky we are."

Brother, Sister, Mother, Explorer (2021)
Jamie Figueroa
"Brother, Sister, Mother, Explorer is a haunting of a novel centered around the hustle of an utterly unforgettable brother and sister. Jamie Figueroa's faultless language surprises, enchants, and does nothing less than articulate that which is unseen and eaten by profound grief. Supervised by a wild, booted angel (a character for the ages), this marvel of a first novel seems powered by a force that wrecks itself and is made glorious, again and again, until its stunning conclusion. Singular, devastating, and divine."