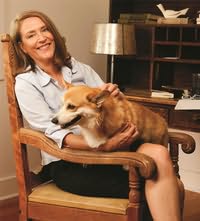 Sarah is the author of eight novels. The ninth, Above the East China Sea, will be published by Alfred A. Knopf in Spring 2014. Sarah has been selected for the Barnes & Noble Discover Great Writers series; a Dobie-Paisano Fellowship; New York Public Librarys 25 Books to Remember list; Elle Magazine Readers Prize; People Magazines Page Turners; Library Journals Best Novels; and a National Magazine Silver Award for her columns in Texas Monthly. In 2012 Sarah was voted Best Austin Author for the fourth time by the readers of the Austin Chronicle; was inducted into the Texas Literary Hall of Fame; and received the Illumine Award for Excellence in Fiction from the Austin Library Foundation. In 2013 she was selected to be The University of Texas Libraries Distinguished Author speaker, and was featured on NPRs The Moth Radio Hour.

Sarah, who moved all over the world growing up with her air force family, lives in Austin, Texas.

Women On the Verge of a Nervous Breakthrough (2011)
Ruth Pennebaker
"Breezily hilarious... and ultimately tender and heart-tugging."

Bedside Manners (2014)
(Breakup Doctor, book 2)
Phoebe Fox
"As heartwarming as they are humorousâ€”Foxâ€™s books offer more than the usual chick lit fare, with a lot of heart and a smart, relatable heroine in Breakup Doctor Brook Ogden."

All Things Left Wild (2020)
James Wade
"A debut full of atmosphere and awe. Wade gives emotional depth to his dust-covered characters, and creates an image of the American West that is harsh and unforgiving, but--like All Things Left Wild--not without hope."