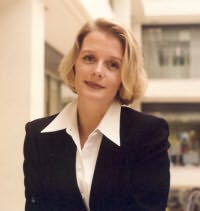 (b.1965)
Wendy Holden grew up in Yorkshire, and studied English at Girton College, Cambridge. She worked in magazines for many years before joining Tatler's in 1997 as deputy editor, and later moved to the Mail on Sundays You magazine, which she left in 2000 to concentrate on writing. She regularly writes features for newspapers and magazines on a range of social, topical and lifestyle subjects and is also a television and radio contributor.

Holden is married, and lives in England with her family.

That Dangerous Age (2002)
Alexandra Campbell
"Campbell is a razor-sharp commentator on modern life and aspirations."

Pure Fiction (2003)
Julie Highmore
"Pacy and witty, Highmore's take on the country comedy is as fresh, crisp and delicious as a new organic carrot."

Fifty Is Not a Four-letter Word (2007)
Linda Kelsey
"Funny, wise, true and not just for women of fifty!"

Leftovers (2013)
Stella Newman
"Her writing is witty and snappy."

Black Rabbit Hall (2015)
Eve Chase
"Beautifully, poetically written and reminiscent of everything from I Capture The Castle to Hansel And Gretel. Eve Chase is a name to watch."

Lily's House (2016)
Cassandra Parkin
"Parkin is a wonderful writer with a painterly eye for detail - lush gardens, lashing seas - and a way of slowly releasing key facts... There are some brilliant twists."

Professor Chandra Follows His Bliss (2019)
Rajeev Balasubramanyam
"This brilliant and eloquent novel, which puts into words so many unutterable annoyances, is a sort of Zen satire in which tolerance and understanding mingle with hilarious criticism of contemporary mores. It’s a wonderful read."