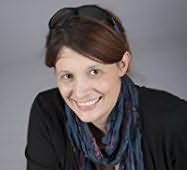 Anne Corlett is originally from the north-east, but sort of slid diagonally down the map, and now lives near Bath with her partner and three young sons.
A criminal solicitor by profession, Anne returned to writing in 2012 after a long hiatus. She now writes full time (or as full time as three children will allow) and her articles and short stories have been published in various magazines and anthologies.
Anne has won, placed in or been shortlisted for various awards, including the Bristol Short Story Prize, the Bath Short Story Award and the HE Bates Prize.

The Space Between the Stars was written during an MA in Creative Writing at Bath Spa University.

Genres: Science Fiction
Novels
The Space Between the Stars (2017)