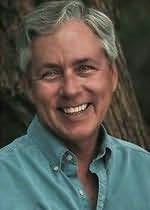 (b.1953)
Carl Hiaasen (pronounced "hiya-sun") was born and raised in south Florida, where he still lives with his family. He attended Emory University and graduated with a degree in journalism from the University of Florida in 1974.


Since 1976, Hiaasen has worked for the Miami Herald, beginning as a general assignment reporter and later joining the newspapers prize-winning investigations team. There he worked on projects exposing dangerous doctors, crooked land deals, and drug corruption in the Bahamas and the Keys. For the last twenty years, Hiaasen has written a regular column that has won numerous awards and earned him the enmity of many sleazy politicians, whove found themselves the target of his pen. Today his column appears on most Sundays in the Heralds opinion-and-editorial section.  Together Hiaasens novels have been published in 33 languages32 more than he is able to read or write. The London Observer has called him "America's finest satirical novelist," while Janet Maslin of the New York Times has compared him to Preston Sturges, Woody Allen, and S. J. Perelman.


For his journalism and commentary, Hiaasen received the Damon Runyon Award from the Denver Press Club in 20032004. Hiaasen began writing novels in the early 1980s with his good friend and distinguished journalist, the late William D. Montalbano. Together they wrote three mystery thrillersPowder Burn, Trap Line, and Death in Chinawhich borrowed heavily from their own reporting experiences.

Rules of Prey (1989)
(Prey, book 1)
John Sandford
"So chilling that you're almost afraid to turn the pages."

Blue Truth (1991)
Cherokee Paul McDonald
"Has all the drama, balck humor, and grit of a big-city police beat."

House on Fire (1996)
Denis Hamill
"A powerfully authentic story of a family, a city and a true working-class hero. Nobody knows the territory better than Denis Hamill."

The Death and Life of Bobby Z (1997)
Don Winslow
"It has whiplash speed, deliciously sleazoid characters, and a major attitude problem. What a blast."

Tricky Business (2002)
Dave Barry
"One of the funniest writers alive."

Bangkok Eight (2003)
(Sonchai Jitpleecheep, book 1)
John Burdett
"One of the most startling and provocative mysteries I've read in years."

The Librarian (2004)
Larry Beinhart
"Okay, so he's no Woodward or Bernstein. But he's a damn sight funnier."

Kill All The Lawyers (2006)
(Solomon Vs. Lord, book 3)
Paul Levine
"Paul Levine writes some of the funniest - and most wickidly accurate - courthouse dramas you'll ever read."

The Power of Positive Idiocy (2010)
David Feherty
"David Feherty i a brilliantly deranged soul. There are passages in this book that will make you swear that Hunter Thompson is alive and well."

Blood Knots (2010)
Luke Jennings
"Blood Knots is one of those small but enthralling surprises that lands every now and then on a writer's desk. Like all great fishing books, it can be embraced with unabashed delight by readers who wouldn't know a trout from a truffle. . . . Special and magnetic."

Breakaway (2010)
Andrea Montalbano
"Breakaway is for every soccer kid who's dreamed of taking it all the way."

Resurrection (2014)
(Brenner , book 3)
Wolf Haas
"Wolf Haas is the real deal, and his arrival on the American book sence is long overdue."

Perfidia (2014)
(Second L.A. Quartet, book 1)
James Ellroy
"Perfidia is a brilliant, breakneck ride. Nobody except James Ellroy could pull this off. He doesn't merely write—he ignites and demolishes."

Every Man a Menace (2016)
Patrick Hoffman
"Every Man a Menace is everything you could want in a thriller - lightning pace, dead-on dialogue, and a twisting, high-torque plot. But, most of all, this novel is smart and authentic, a welcome jolt at a time when so much fiction reads like it rolled off an assembly line."

IQ (2016)
(IQ, book 1)
Joe Ide
"I don't know how fast Joe Ide writes, but from now on he'll have to write faster. Everyone who reads IQ will be clamoring for the next book, and for the one after that. This is one of the most intriguing--and appealing--detective characters to come along in years."

The Price You Pay (2018)
Aidan Truhen
"This novel has high-octane everything. It's a witty, gory, whiplash revenge tale narrated by a brilliantly entertaining sociopath. You're mortified by the things you find yourself laughing at - and when you turn the page, there's more. Guess what: you keep laughing."