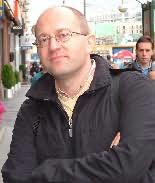 France (b.1970)
Armand Cabasson was born in 1970. He is a psychiatrist working in the North of France. The Officer's Prey is the first in the Quentin Margont series of thrillers set in the Napoleonic Wars. It was published in France in 2002 as Les proies de l'officier, which received the 2003 Gendarmerie Nationale Thriller Prize. The second in the series, Chasse au loup (published the UK in May 2008 as Wolf Hunt) was awarded the 2005 Fiction Prize by the Napoleonic Foundation. Armand Cabasson is a member of the Souvenir Napoléonien and has used his extensive research to create a vivid portrait of the Napoleonic campaigns.
Series
Quentin Margont Investigation
1. The Officer's Prey (2007)
2. Wolf Hunt (2008)
3. Memory of Flames (2009)