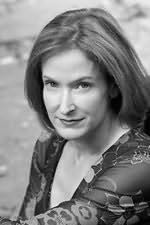 A pseudonym used by Francine Mathews
Stephanie Barron was born Francine Stephanie Barron in Binghamton, NY in 1963, the last of six girls. Her father was a retired general in the Air Force, her mother a beautiful woman who loved to dance. The family spent their summers on Cape Cod, where two of the Barron girls now live with their families; Francine's passion for Nantucket and the New England shoreline dates from her earliest memories. She grew up in Washington, D.C., and attended Georgetown Visitation Preparatory School, a two hundred year-old Catholic school for girls that shares a wall with Georgetown University. Her father died of a heart attack during her freshman year.

She wrote her first book in 1992 and left the Agency a year later. Fifteen books have followed, along with sundry children, dogs, and houses. When she's not writing, she likes to ski, garden, needlepoint, and buy art. Her phone number is definitely unlisted.

What Angels Fear (2005)
(Sebastian St. Cyr Mystery, book 1)
C S Harris
"An absorbing and accomplished debut that displays a mastery of the Regency period in all its elegance and barbarity. What Angels Fear will grip the reader from its first pages and compel to the finish."