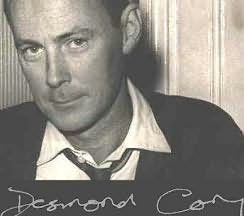 (1928 - 2001)
Shaun Lloyd McCarthy was born in Lancing, Sussex, educated at Steyning Grammar School and, after National Service in the Royal Marines, at St Peter's College, Oxford, where he read English Literature. He began writing his first Johnny Fedora stories at the age of 19 and the first Fedora novel, Secret Ministry, was published in 1951 as he graduated from university. He began his professional writing career as a technical translator in Cordoba in Spain and from then on he combined an academic career with writing fiction under the pen-name Desmond Cory, initially at the University of Cardiff and then at universities in Qatar, Bahrain, Yemen and Cyprus. In 1996, he retired with his Spanish wife to Malaga. In total he wrote 45 crime thrillers, scripts for film and radio and many academic papers on modern English Literature, but his most famous character was undoubtedly Johnny Fedora. Although Undertow is the eleventh Fedora novel it was the first in what became known as the Feramontov Quintet after the KGB agent who was to become Fedora's most dedicated enemy.