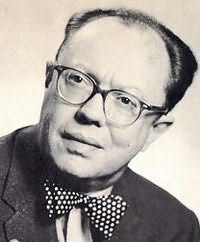 aka H H Holmes, Herman W Mudgett
Anthony Boucher (born William Anthony Parker White) (August 21, 1911 April 29, 1968) was an American science fiction editor and author of mystery novels and short stories. He was particularly influential as an editor. Between 1942 and 1947 he acted as reviewer of mostly mystery fiction for the San Francisco Chronicle. In addition to 'Anthony Boucher,' White also employed the pseudonym 'H. H. Holmes', which was the name of a 19th-century serial killer.

In a poll of 17 detective story writers and reviewers, his novel Nine Times Nine was voted as the ninth best locked room mystery of all time.

White was born in Oakland, California, and went to college at the University of Southern California. He later received a Masters degree from the University of California, Berkeley. He was admired for his mystery writing but was most noted for his editing, his science fiction anthologies, and his mystery reviews for many years in The New York Times. He was the first English translator of Jorge Luis Borges, translating "El jardín de senderos que se bifurcan" for Ellery Queen's Mystery Magazine. He helped found the Mystery Writers of America in 1946 and, in the same year, was one of the first winners of the MWA's Edgar Award for his mystery reviews in the San Francisco Chronicle.

Never Fight a Lady (1951)
(Gidleigh)
Seldon Truss
"As joyously readable thriller as you could ask."

You'll Die Next! (1954)
Harry Whittington
"The best sheer storytelling... I couldn't have held my breath any longer."

Gideon's Vote (1964)
(Gideon, book 10)
J J Marric (John Creasey)
"The novel is wholly admirable, and no one else could possibly have written it."

It's Cold Out There (1966)
Malcolm Braly
"Braly... exposes most of the toughly 'realistic' writers as naive romantics."