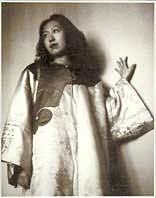 China (1920 - 1995)
Eileen Chang was born into an aristocratic family in Shanghai. Her father, deeply traditional in his ways, was an opium addict; her mother, partly educated in England, was a sophisticated woman of cosmopolitan tastes. Their unhappy marriage ended in divorce, and Chang eventually ran away from her father-who had beaten her for defying her stepmother, then locked her in her room for nearly half a year. Chang studied literature at the University of Hong Kong, but the Japanese attack on the city in 1941 forced her to return to occupied Shanghia; where she was able to publish her stories and essays.
Novels
Naked Earth (1956)
The Rouge of the North (1967)
The Rice Sprout Song (1998)
The Fall of the Pagoda (2010)
The Book of Change (2010)
Little Reunions (2018)