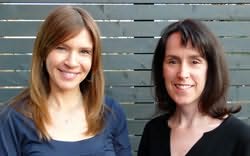 Canada
They met as teens while working in a public library in a Toronto suburb. Writing books together was the last thing on their minds at that point. In fact, their animated discussions in the book stacks about boys, clothes and beauty products soon led the evil head librarian to schedule them on separate shifts.

While attending the University of Toronto, their conversational topics expanded somewhat and they managed to complete Bachelor of Arts degrees--Yvonne's in Criminology and Sandy's in English Literature. Yvonne promptly launched into a series of unsuitable jobs, while Sandy delayed the inevitable by getting a second degree in journalism.

Flash forward a decade or so to find Yvonne on the camera crew of major feature films, and Sandy working in corporate communications. They still talked about boys, clothes and beauty products, but despite their best efforts, they had come to the age of reason and it was time to share what they'd learned.

At the urging of Yvonne's niece, they wrote a book for teens called Totally Me: The Teenage Girl's Survival Guide. When they ran out of good advice, they turned to writing fiction--first for adults, with Speechless, and then for teens, with Introducing Vivien Leigh Reid: Daughter of the Diva.

Although they currently live in downtown Toronto, they head back to the suburbs regularly.