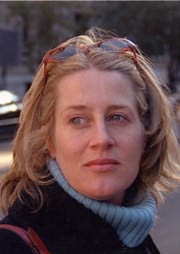 (b.1970)
Cecily von Ziegesar is the author of the "Gossip Girl" books, a series about a group of rich Manhattan teenagers and their adventures with sex, drugs, and alcohol. The books have been criticized as nothing more than the written equivalent of a soap opera, but fans believe von Ziegesar speaks honestly about contemporary teen life.

Hold On Tight (2006)
(Inside Girl, book 5)
J Minter
"It's physically impossible not to fall madly, unreasonably in love with each one of the Insiders."

Inside the Mind of Gideon Rayburn (2006)
(Midvale Academy, book 1)
Sarah Miller
"Being inside Gideon's mind is like reading the personal diary of a guy you have a huge crush on."

Seven Year Switch (2010)
Claire Cook
"Claire Cook's well-traveled protagonist is smart, truly hilarious, and entirely sympathetic. Like a hot bubble bath or a holiday at the beach, you won't want it to end."

Take the Stage (2012)
(Celebriteens, book 3)
Joanna Philbin
"Gossip Girl herself would love this."

The Amateurs (2016)
(Amateurs, book 1)
Sara Shepard
"The Amateurs is Sara Shepard at her best-chilling and romantic and full of surprises. A classic whodunit with a contemporary edge. The ending will leave you with your hair standing up, begging for more."

All These Beautiful Strangers (2018)
Elizabeth Klehfoth
"Juicy, clever, and beguiling. [...] An exceptional debut novel, deftly crafted and written with style. It is the perfect book to read at the beach. But be warned: you will get a sunburn, because you won’t want to put it down."
Visitors to this page also looked at these authors
Anne Zouroudi
Mariana Zapata
Anna Zaires
Roger Zelazny
Rebecca Zanetti
Abbie Zanders
A Zavarelli
Sarah Zettel
Markus Zusak
Scott Westerfeld
Carlos Ruiz Zafón
Suzanne Young
Samantha Young
Chad Zunker
Timothy Zahn
Sara Shepard