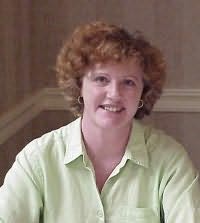 Deborah Donnelly is a sea captain's daughter who grew up in Panama, Cape Cod, and points in between. She attended Macalester College in St. Paul, and earned a masters in library science at the University of Washington. She's been cooking up stories ever since she could think.

Deborah has occupied herself with several occupations. She's been an academic librarian in Walla Walla, an executive speechwriter in Seattle, and an improbable nanny in Singapore. Along the way she wrote science fiction that appeared in Asimov's, F&SF, and Universe - not to mention reprints in Portuguese and Lithuanian.
Series
Wedding Planner
1. Veiled Threats (2002)
2. Died to Match (2002)
3. May the Best Man Die (2003)
4. Death Takes a Honeymoon (2005)
5. You May Now Kill the Bride (2006)
6. Bride and Doom (2006)