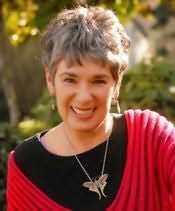 (b.1950)
Susan Andersen is an American writer of romance novels. She has been nominated three times for Romantic Times Magazine's Reviewer's ChoiceAwards, winning in 1998 for Baby, I'm Yours. She has also been named a Romantic Times Career Achievement Award winner. She has appeared three times on the list of 10 novels picked as Amazon.com Editor's Choice in 2001, 2002 and 2003.

Susan was raised in Seattle, Washington surrounded by men; her father, her two older brothers and her grandfather. She trained as a dentalassistant, although she did not like working for dentists. After she turned 30, Andersen felt that she might have the "life experience to string anentire book together. She is married to her high school sweetie, and they had a son.

Beach House No. 9 (2013)
(Crescent Cove CA, book 1)
Christie Ridgway
"Sexy and addictive - Ridgway will keep you up all night!"