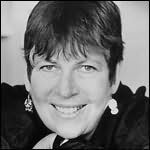 Jamaica (b.1951)
Patricia Duncker attended school in England and, after a period spent working in Germany, she read English at Newnham College, Cambridge.

She studied for a D.Phil. in English and German Romanticism at St Hugh's College, Oxford.

The Semantics of Murder (2008)
Aifric Campbell
"This gripping psychological drama hooks the reader into a compelling labyrinth of sibling rivalry and stealthy passion. It is an intellectual novel of ideas written with real verve and style."