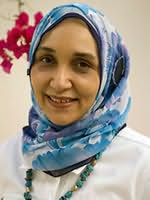 Sudan (b.1964)
Leila Aboulela was born in 1964 and grew up in Khartoum, learning English at an American primary school and later at The Sisters' School, a private Catholic school. She took a degree in Economics at the University of Khartoum and then travelled to Britain to study for an M.Sc. in Statistics at the London School of Economics. In 1990 she moved to Scotland with her husband and their three children. She started writing in 1992 while lecturing in Statistics and working as a part-time Research Assistant. Her first stories were broadcast on BBC Radio and an anthology Coloured Lights was published by Polygon in 2001. The Translator was first published to critical acclaim in 1999. It was long-listed for the Orange Prize 2000 and also long-listed for the IMPAC Dublin Literary Awards 2001. Leila Aboulela won the Caine Prize for African Writing in 2000 for 'The Museum', published in Heinemann's short-story collection, Opening Spaces.

Swallow (2010)
Sefi Atta
"Tender, fierce, vivid and memorable -- a bold, distinctive novel from a writer who doesn't compromise her integrity"

Born On a Tuesday (2016)
Elnathan John
"[An] impressive debut . . . I was carried along by the endearing voice of the young, sensitive narrator, his instinctive goodness and intelligence in making sense and finding beauty in the brutality, poverty, and oppression surrounding him. The novel manages to pull off two aims at the same time?giving the reader a sophisticated understanding of contemporary Nigerian politics and the pleasure of a tender and classy coming of age story."