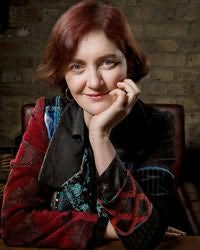 Ireland (b.1969)
Emma Donoghueis the youngest of eight children of Frances and Denis Donoghue. She attended Catholic convent schools in Dublin, apart from one year in New York at the age of ten. In 1990 she earned a first-class honours BA in English and French from University College Dublin, and in 1997 a PhD (on the concept of friendship between men and women in eighteenth-century English fiction) from the University of Cambridge. Since the age of 23, Donoghue has earned her living as a full-time writer. After years of commuting between England, Ireland, and Canada, in 1998 she settled in London, Ontario, where she lives with her partner and their son and daughter.

Out of Line collection
Halfway to Free (2020)

Pigeon English (2011)
Stephen Kelman
"This boy's love letter to the world made me laugh and tremble all the way through."

The Reinvention of Love (2011)
Helen Humphreys
"Witty, sad and gorgeous."

What I Did (2011)
Christopher Wakling
"This is family life at its most believable: warm and messy, bored and raging. What I Did is every parent's nightmare, but will make you burst out laughing too. I LOVED IT."

The Song of Achilles (2011)
Madeline Miller
"Mary Renault lives again! A ravishingly vivid and convincing version of one of the most legendary of love stories."

Carry the One (2012)
Carol Anshaw
"Will lift readers off their feet and bear them along on its eloquent tide."

The Lifeboat (2012)
Charlotte Rogan
"The Lifeboat traps the reader in a story that is exciting at the literal level and brutally moving at the existential. I read it in one go."

Elizabeth Is Missing (2014)
Emma Healey
"Elizabeth Is Missing will stir and shake you: an investigation into a seventy-year-old crime, through the eyes of the most likeably unreliable of narrators. But the real mystery at its compassionate core is the fragmentation of the human mind."

The Quality of Silence (2015)
Rosamund Lupton
"Like a breath of icy air, this relentlessly tense thriller is also a child's-eye family drama like none other. Not since Smilla’s Sense of Snow have I shivered like this."

The Evening Road (2017)
Laird Hunt
"A strange, dazzling novel, as audacious as it is lyrical, The Evening Road hauls up insight, sorrow, and even--somehow--wit from the well of American history."

Dear Edward (2020)
Ann Napolitano
"Dear Edward made me think, nod in recognition, care about its characters, and cry, and you can’t ask more of a novel than that."

How Much of These Hills Is Gold (2020)
C Pam Zhang
"A ravishingly written revisionist story of the making of the West, C Pam Zhang's debut is pure gold."

Sin Eater (2020)
Megan Campisi
"Sin Eater is a dark and thrilling page turner that turns a dystopian eye on the past in an unnervingly contemporary way. All hail Megan Campisi and her smashing novel."

The Last Exit (2021)
(Jen Lu Mystery, book 1)
Michael Kaufman
"An engrossing thriller set in a fascinatingly plausible near future, The Last Exit centres on a human-AI partnership that’s as believable as it's moving."