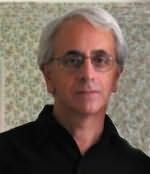 (b.1948)
Edward Falco is the author of Sea Island and A Dream with Demons. He is an award-winning writer and poet, and Associate Professor of English at Virgina Polytechnic and State University. Falco's "The Artist" was recently selected as a 1995 Best American Short Story.
Novels
Winter In Florida (1990)
A Dream With Demons (1997)
Wolf Point (2005)
Saint John of the Five Boroughs (2009)
The Family Corleone (2012)
Toughs (2014)

Dry Bones in the Valley (2014)
(Henry Farrell, book 1)
Tom Bouman
"Officer Henry Farrell is a shy man, but in his own ways just as ornery and tough as the cast of rugged characters who inhabit his Pennsylvania woods, where the mysteries are as old as love and grief. A rural cop with a keen intelligence and a wounded heart, Henry's the right man to unearth the secrets of Dry Bones in the Valley. Tom Bouman's debut novel is one you won't want to miss."

The Hidden Light of Northern Fires (2017)
Daren Wang
"Wang’s engaging novel is a timely reminder of what can happen to a people when human rights are denied and the civil fabric of a nation is torn to pieces."