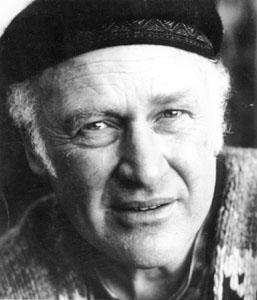 (1935 - 2001)
Ken Kesey was born in La Junta, Colorado, and brought up in Eugene, Oregon. His father worked in the creamery business, in which he was eventually successful after founding the Eugene Farmers Cooperative. Kesey spent his early years hunting, fishing, swimming; he learned to box and wrestle, and he was a star football player. He studied at the University of Oregon, where he acted in college plays. On graduating he won a scholarship to Stanford University. Kesey soon dropped out, joined the counterculture movement, and began experimenting with drugs. In 1956 he married his school sweetheart, Faye Haxby.

In 1965 Kesey was arrested for possession of marijuana. He fled to Mexico, where he faked an unconvincing suicide and then returned to the United States, serving a five-month prison sentence at the San Mateo County Jail. After this tumultuous period he bought farm in Pleasant Hill, Oregon, settled down with his wife to raise their four children, and taught a graduate writing seminar at the University of Oregon. In the early 1970s Kesey returned to writing and published KESEY'S GARAGE SALE (1973). His later works include the children's book LITTLE TRICKER THE SQUIRREL MEETS BIG DOUBLE THE BEAR (1990) and SAILOR SONG (1992), a futuristic tale about an Alaskan fishing village and Hollywood film crew. LAST GO AROUND (1994), Kesey's last book, was an account of a famous Oregon rodeo written in the form of pulp fiction. Kesey died of complications after surgery for liver cancer on November 10, 2001 in Eugene, Oregon.