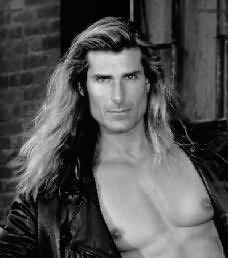 (Fabio Lanzoni)
Italy (b.1959)
Fabio Lanzoni was born in Milan, Italy, the son of Flora (née Carnicelli) and Sauro Lanzoni, a mechanical engineer. He started as a male model and film star in Italy, then moved to New York City and became a runway and catalog model for the Ford agency. He became famous in the romance world for appearing on hundreds of romance book covers, the first of which was Hearts Aflame in 1987.

He is known among video game enthusiasts for his box cover pose for the NES game Ironsword: Wizards & Warriors II in 1989. After retiring from modeling in 1991, Lanzoni left New York for the lure of the big screen, where he hoped to follow in the tradition of Sylvester Stallone and Arnold Schwarzenegger as a new action-adventure film actor. He has also modeled for many authors, including Bertrice Small and Nora Roberts.

In 1992, the William Morris Agency's number one literary agent Robert Gottlieb, became Fabio's literary agent, making Fabio the first best selling male romance writer without the use of a pseudonym. Fabio's books were titled Pirate, Rogue, and Comanche. Fabio then starred in the syndicated TV series Acapulco H.E.A.T., was featured in calendars, led a fragrance campaign, and landed a role in commercials for "I Can't Believe It's Not Butter" margarine.

Fabio appeared in the soap opera The Bold and the Beautiful a number of times, as a close friend of the character Sally Spectra. (Fabio and Darlene Conley, who played Sally, were close friends in real life.)