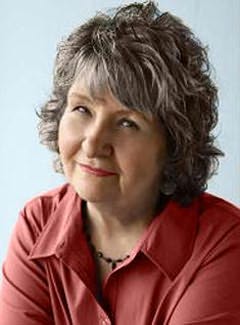 aka Cait Logan
Lois Kleinsasser was born on April 11 and raised in rural Washington state.With rumours of an Austrian princess in her ancestry, Lois is of GermanRussian heritage, and is the only member of her family who is not bilingual.However, like Lois, every member of her family has achieved in the creativearts."I usually teach myself," she says. "And that is what I did withwriting. I believed then, and still do, that artistic elements aretranslatable that given dedication and the eagerness to learn, one can movefrom one art form to another.... In some ways, that untrained,do-it-yourself creativity is more pure than when it is taught. 'Live andlearn' has always served me well. I have been an artist since I was 10, soit seemed only natural to move into writing, that is, creating pictures onpages instead of canvas."

Published since 1986, she started writing historical romances under thepseudonym Cait Logan (the editors didn't want her to use her real name). Loisenjoyed doing research driving the full length of historic Western Americantrails. She has driven the entire Oregon Trail and loved that experience.She uses this historic background in her contemporary romances as CaitLondon. This love of historical research is especially found in the popularTallchief series from Silhouette. The original five-book series was designedas a complete unit, and her editor at the time said she had never seenanything like it. Lois designed the Tallchief logo, the genealogy chart, andof course the ancestral stories and the additional Tallchief books. Also,much of her writing as includes that early background amid the sage and sandand the wheat and apple crops. Where does she get her ideas?" All I have todo is take a long drive, look at an old house or a windmill missing apaddle, and a story unfolds to me," she says. "So those long drives acrossthe West are very profitable, stories sticking to me like lint.

A USA Today bestseller, Lois has received several national kudos includingfeatured alternate in Doubleday and Rhapsody book clubs, and featuredselection in romantic suspense in Mystery Guild book club. Her awardsinclude Holt, Laurel Wreath, RIO (Reviewers International Organization),Bookseller's Best, WRWA Reader's Award for Single Title, B.Dalton'sBestseller Award, several RT nominations and awards, including Reviewer'sChoice Award. However, she lists her top achievement as several years as asingle mother of her three daughters, while she worked a full-time day joband wrote for two publishers.Lois lives in Missouri with her three daughters, she says that three is herlucky number, because she was born in a three year, married in one, and shehas three lovely daugthers. She loves computers, the Internet, creatingbookmarks and newsletters, and reading everything, and she attends museums,festivals, powwows, and other rendezvous for research. Lois also enjoysraising herbs and scented geraniums, driving cross-country, photography,cooking, and generally experiencing life. On her list of future experiencesare updating her ballroom, Latin American, and folk dancing, and travellingabroad (and having Robert Duvall as a tango teacher).

Series contributed to
Men at Work
17. Angel Versus MacLean (1990)