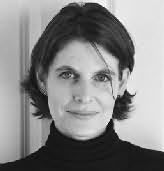 Natasha Farrant has a first-class degree in Modern Languages from Oxford University, an MSc in Social Anthropology from the LSE, and a Diploma in Translation from the Institute of Linguists. She previously worked in publishing and now runs her own children's literary scouting agency. Natasha is in her thirties, and lives in West London with her husband and two children. She speaks French fluently and spends several weeks a year on the Il de Re with her family.

The Skylarks' War (2018)
Hilary McKay
"I laughed, I cried and I wanted all the characters to be my best friend."